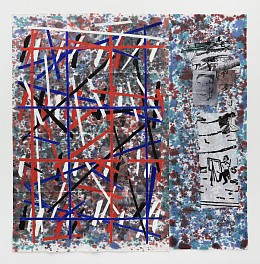 ‘Airmail painting’ has been Dittborn’s primary practice since 1984.  Initially executed on sheets of brown paper, which could be folded down to one-sixteenth of its size and sent in large envelopes through the international mail system, he has twice changed the material of the underlying structure of the ‘airmail paintings:’  in 1986 to a non-woven fabric and again in 1994 to cotton duck. The folds in the work bear the traces of the cultures and political landscapes through which they travel.

In 1997 his work was the subject of a survey exhibition at the New Museum of Contemporary Art in New York which traveled to the Museo Nacional de Bellas Artes in Santiago (1998).  In 2010, his recent work was exhibited in a one-person exhibition at Museo De Artes Visuales (MAVI), Santiago de Chile.  In the fall of 2011, a survey of  Eugenio Dittborn’s large scale, multi-panel ‘airmail paintings’ was held at the Bienal do Mercosul  in Porto Alegre, Brazil.

In 2012, his work was selected for inclusion in “Intense Proximity” La Triennale de Paris and was a part of, “This Will Have Been: Art, Love, & Politics in the 1980s,” which travelled from the Museum of Contemporary Art, Chicago, to the Walker Art Center, Minneapolis, and the Institute of Contemporary Art, Boston. “Airmail Paintings 1989-2011,” an exhibition of eight large works was shown at Alexander and Bonin in the fall of 2012. In 2018, an exhibition of new work took place at Alexander and Bonin in the Spring of 2018.

In 2013, Museum Het Domein, Sittard presented a retrospective of his airmail paintings followed in 2014 by two solo shows, one “Pinturas Aeropostales” at KOW, Berlin and a second exhibition of recent drawings at D21 Proyectos de Arte, Santiago. The following year, his work was included in the group exhibition “Resistance Performed - Aesthetic Strategies under Repressive Regimes in Latin America” at Migros Museum für Gegenswartskunst, Zürich.  In 2015, the artist was the subject of a solo installation “Las Dos” at the Pontificia Universidad Católica, Santiago.

In 2021, a solo exhibition of Eugenio Dittborn's work opened at Goldsmiths Center for Contemporary Art, London.