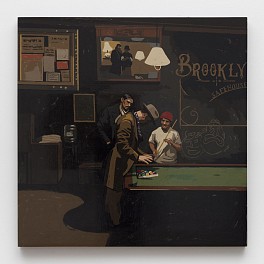 Matthew Benedict (b. 1968, Rockville, Connecticut) studied at the School of the Art Institute of Chicago and the New School for Social Research, New York.

Benedict has had several exhibitions of his paintings and sculptures at Alexander and Bonin, New York and Mai 36 Galerie, Zürich.  In 2008, a large survey exhibition of Benedict’s work was presented at the Von der Heydt-Museum/Kunsthalle Barmen, Wuppertal and accompanied by “The Mage’s Pantry,” a monograph published by Hatje Cantz. “Dramatis Personae,” an exhibition of his photographs was on view at Alexander and Bonin in 2010. In 2011 his paintings were shown at Galeria Álvaro Alcázar, Madrid. Benedict was also a resident at the Versailles /Giverny Foundation.  In 2014 he completed a commissioned mural for the Smyth Hotel Evening Bar in Tribeca. Stene Projects, Stockholm presented solo exhibitions of his work entitled “Land’s End” (2013) and “Based on The True Story” (2016). Benedict's most recent solo show, “Manifestations,” took place at Alexander and Bonin in 2021.