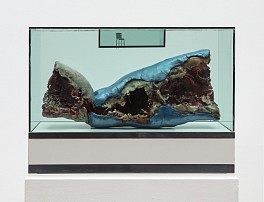 A sculptor, painter, and one of the first artists to create environmental installations, Thek came to recognition showing his sculpture in New York galleries in the 1960s. The first works exhibited, which he began making in 1964 and called "technological reliquaries" were wax sculptures that resembled raw meat or human limbs encased in plexiglass vitrines. In the late 1960s and 1970s, Thek spent much of his time in Europe exhibiting collaborative room-size installations, incorporating elements from art, literature, theater, and religion, often employing fragile and ephemeral materials such as sand, newspaper, and trees. These installations were exhibited at the Stedelijk Museum, Amsterdam; the Moderna Museet, Stockholm; the Kunstmuseum Lucerne; and Documenta V, Kassel, curated by Harald Szeeman.

Thek’s work is in numerous American and European museum collections with a particularly strong representation of his drawings at the Museum of Modern Art, New York, and the Philadelphia Museum of Art.

From 2010 through 2011, Diver, a retrospective of Thek’s work curated by Elisabeth Sussman and Lynn Zelevansky, was exhibited at the Whitney Museum of American Art, New York, the Carnegie Museum of Art, Pittsburgh, and The Hammer Museum, Los Angeles. In 2015, Alexander and Bonin presented Ponza and Roma, the first exhibition to examine the paintings and drawings Thek made in Italy in the 1970s. That same year the Museum Boijmans Van Beuningen in Rotterdam exhibited Thek’s works and letters, which came into their collection in 1994 through the bequest of Franz Deckwitz. Currently on view at Alexander and Bonin, Paul Thek: Relativity Clock is the most recent solo exhibition of Thek’s work since 2017.