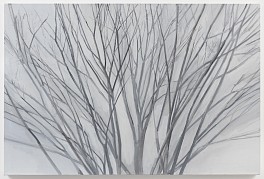 The artist began exhibiting her paintings in the late 1960s, and her work has been the subject of more than thirty solo exhibitions, including three museum surveys each accompanied by a monograph: Madison Art Center (1982), Wesleyan University and University of Michigan (1992), and Albright-Knox Art Gallery (1994). Solitaire, a 2008 exhibition at the Wexner Center for the Arts, included approximately twenty paintings by Plimack Mangold in juxtaposition with bodies of work by Lee Lozano and Joan Semmel. A solo exhibition of her work was shown at Alexander and Bonin, New York in the Spring of 2012.