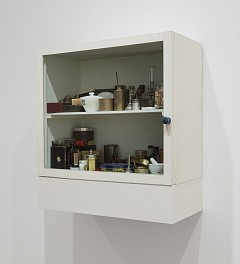 Victor Grippo (1936 Junín, Argentina - 2002, Buenos Aires, Argentina) was the son of Italian immigrants to Argentina. He studied chemistry at the Universidad Nacional de la Plata and art at the Escuela Superior de Bellas Artes. He had his first solo exhibition in 1966.  In 1970, he joined the Grupo CAYC and began work on his series ‘Analogías,’ which explored opposites such as art-science, nature-culture, and real-artificial. The artist is widely considered to be amongst the main precursors of conceptual art in South America.  His work combined organic materials and minerals with daily objects to depict natural forms of energy within a framework of scientific knowledge and his own writing and poetry.

In 2009, Grippo had solo shows at Alexander and Bonin and Expotrastiendas, Buenos Aires. In 2011, he was included in the group exhibition “Radical Shift: Politische und soziale Umbrüche in der Kunst Argentiniens seit den 60er Jahren” at the Museum Morsbroich, Leverkusen, Germany. From 2013 – 2104, a traveling solo exhibition of his work “Transformation” was shown at Centro Gallego de Arte Contemporánea (CGAC), Santiago de Compostela, Museo Universitario Arte Contemporáneo (MUAC), Mexico City, and the Museo de Arte del Banco de la República, Bogotá. In 2019, he was the subject of “Victor Grippo: Sculpture and Drawings 1955-2001” at Alexander and Bonin.