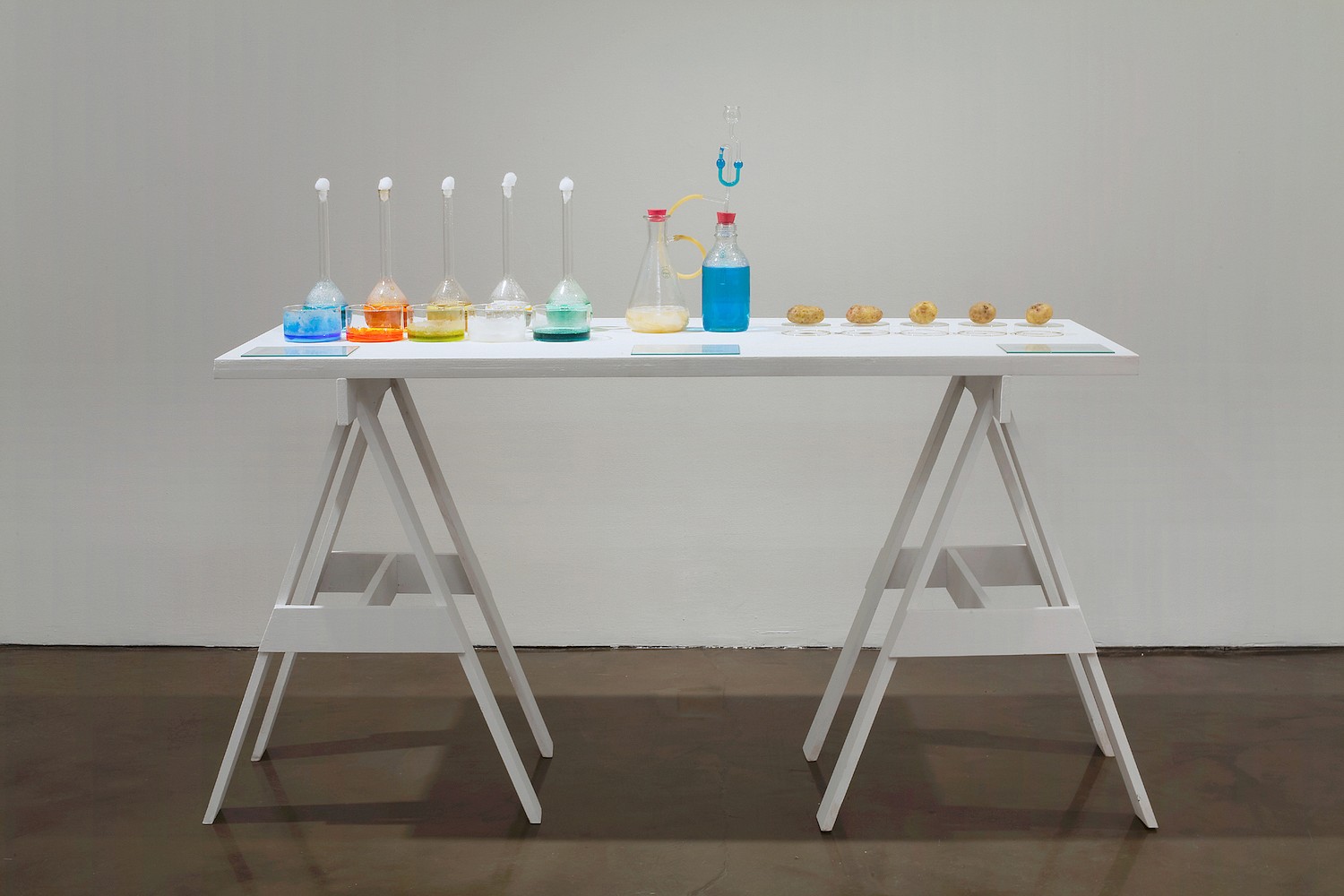 Victor Grippo (1936 Junín - 2002, Buenos Aires) is widely considered to be a significant precursor of conceptual art in South America. Before studying painting, Grippo trained as a chemist; his early education in the sciences deeply influenced his practice, particularly his interests in chemical reactions, experiment design, and system organization. At the center of the exhibition are two large-scale installations with long tables, a crucial trope of the artist. In Naturalizar al humano, humanizar a la naturaleza (1977), the six-meter table is covered in 800 pounds of potatoes that slowly sprout over the course of the exhibition and a series of flasks containing colored solutions, drawing out subtle analogies between chemical, plant, and social transformation. In La Comida (1991), the table is set with an inedible meal (including burnt bread, a golden egg, dried eggplants, and a popped corn kernel) and there are more place settings than seats, confronting the viewer with questions of scarcity and abundance, sacrifice, and the distribution of resources.

In Grippo’s words, he was searching “for an analogy between consciousness and energy, in mankind’s heraldry and the soul’s metabolism.” This alchemical drive is particularly present in works such as Todo en marcha (1973) and Tiempo (1991), which bring together chemical reactions and organic decay. Grippo’s distinct visual language, which often deployed diagrams and circuits as both a critical methodology and as works themselves, is particularly visible in his drawings and wall-mounted boxes. In both A 17° de la vertical (2000) and Sutil (2001), Grippo maps out the complex physical relationships between distinct objects and freezes them in a series of tableaux. A similar logic imbues some of the drawings on display, many of which are being exhibited for the first time; experiments are mapped out, tools are designed, and natural processes are visualized. A parallel set of eerily playful figures also populate his drawings, most notably a series of chimeric, semi-feline beings and hairless humanoids.

Victor Grippo has been the subject of retrospectives at the Ikon Gallery, Birmingham and the Palace of Fine Arts, Brussels (1995), the Museo de Arte Latinoamericano de Buenos Aires (MALBA) (2004), and at the Camden Arts Centre, London (2006). A one-person exhibition and comprehensive monograph was organized by at MALBA in 2012 and Transformations was presented at Centro Galego de Arte Contemporánea (CGAC), Santiago de Compostela; Museo de Arte Contemporánea (MUAC), Mexico City; and Museo de Arte del Banco de la República, Bogotá in 2013-14. His installations and sculptures have been part of many group exhibitions: Grupo CAYC at Museu de Arte Moderna (MAM), Rio de Janeiro (1978), the biennials of São Paolo (1979, 1991, 1998, 2016), Paris (1969), Havana (1991, 1994) and Venice (1986), “Documenta 11,” Kassel (2002).