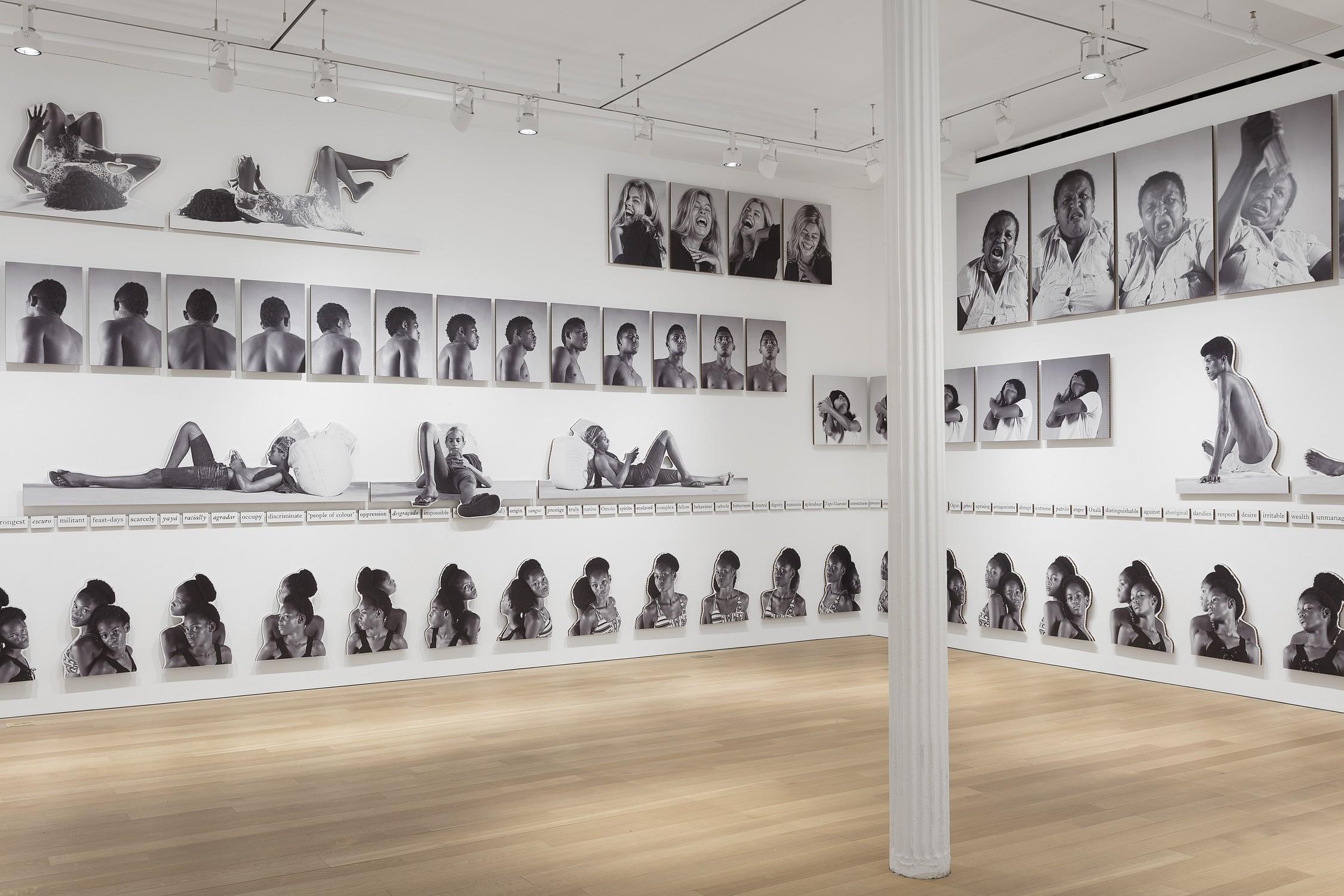 Alexander and Bonin is pleased to announce the opening of a solo exhibition of Jonathas de Andrade’s most recent work, Eu, mestiço (Me, mestizo) and Voyeristico on Saturday, March 3, 2018.

Eu, mestiço takes as its starting point an anthropologic study titled “Race and Class in Rural Brazil,” which was carried out by Columbia University in partnership with the UNESCO in the early 1950s. At a time when Brazil was seen as an epitome of racial democracy, the study aimed to establish racial typologies and search for a possible structural genesis for racism in the country.

The study was based on interviews which made use of photographs of black, white, and mixed-raced Brazilians. Local people across Brazil were shown these portraits and asked to qualify these people’s attractiveness, presumed wealth, intelligence, work ethic, and morality, among other attributes. The results of the analysis evidently presented racist stereotypes. And while the photographs used to conduct the questioning prompted the participants to manifest prejudice, the images themselves were not included in the resulting publication.

“Seeing the book with contemporary eyes not only offers a violent picture of racism at that time,” Andrade points out, “but also attests to how much racism remains the same today.” As a means of both reflecting on the study and reversing its essence, Andrade decided to create new images in relation to the text produced in the 1950s. The artist’s project was carried out across Brazil, in the cities of São Paulo, Ilhéus (where the original study was initiated), São Luis, and Imperatriz. After presenting the UNESCO study to potential sitters, Andrade invited them to physically interpret the social types presented in the book, resulting in a series of portraits of people expressing various emotions and poses that call up an iconographic imaginary of race and class.

Juxtaposed to qualitative words taken directly from the UNESCO research, Andrade’s work produces a certain discomfort in viewers, inducing them to reflect on their own racial and class prejudices. Printed on mass-produced material typical of signboards in Brazil, the photographs recall both the visual aesthetics and stereotypical images of street advertising, bringing to light the ways in which photographic images continue to shape preconceptions about race and class. Working from an existent study to re-conceptualize it, Andrade continues to combine nuances of reality and artifice in order to create an ambivalent space in which to investigate racial and class tensions in Brazil.

For his most recent video, Voyeristico 2018, Jonathas de Andrade approached passers-by in the streets of Recife and São Paulo to film them while they slowly opened their wallets and displayed their contents. Constructed as a sequence of midhigh angle snapshots, the video offers an unusual visual entry into the participants’ private lives. It can be seen as a commentary on the corruption endemic in Brazil and the trials and imprisonment of leading politicians. A suggestivelycharged object, the wallet triggers ideas about a person’s wealth and social background. Its contents; banknotes, coins, credit cards, identity documents, and miscellaneous personal articles; further shape the viewer’s perception of its owner’s identity. A voyeuristic glimpse into individuals’ possessions, the video also suggests fetishistic impulses towards paper money and the presence of hidden wealth.

Jonathas de Andrade (b. 1982, Maceió, Brazil) lives and works in Recife. The artist uses photography, installation, and video to traverse collective memory and history, making use of strategies that shuffle fiction and reality. Recent solo museum exhibitions include Kunsthalle Lissabon, Lisbon (2013); Museu de Arte do Rio (2014-2015); The Power Plant, Toronto (2017); and New Museum, New York (2017). Jonathas de Andrade's work was also included in exhibitions such as Under the Same Sun: Art from Latin America Today at the Guggenheim Museum, New York (2014); Question the Wall Itself at the Walker Art Center (2016-17); and Unfinished Conversations: New Work from the Collection at The Museum of Modern Art, New York (2017). In 2019, a solo exhibition of Andrade’s work will open at the Museum of Contemporary Art in Chicago.