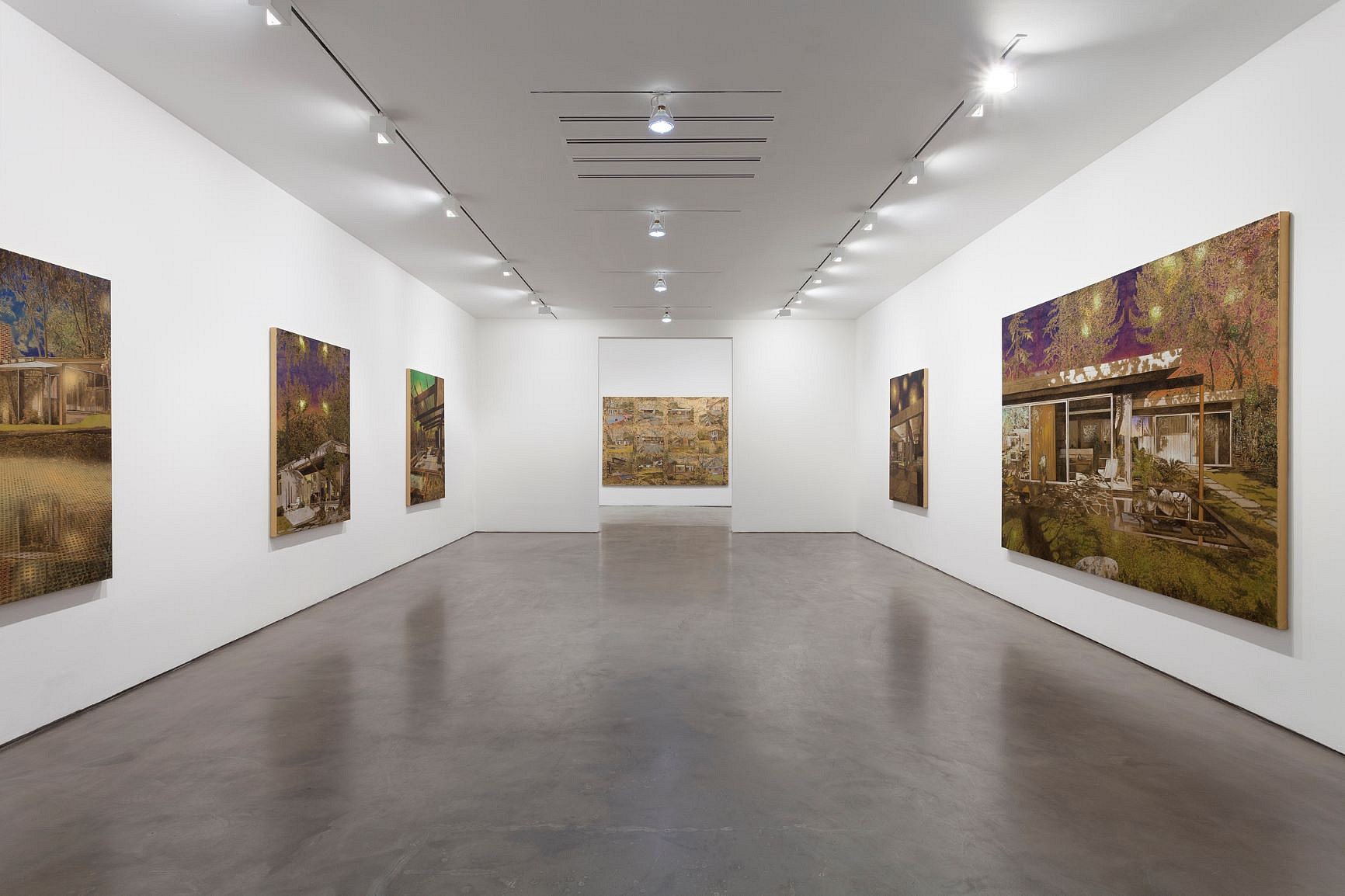 An exhibition of new paintings and works on paper by Stefan Kürten will open at Alexander and Bonin on April 18th. The exhibition features Running to stand still (2014), a large scale painting depicting a grid of houses which emerge from a golden, abstracted thicket and represent Kürten’s typography of 20th Century homes.

Modernist overhang slab roof houses, brick villas in idyllic surroundings and suburban bungalows with neat garden paths and flower beds are the subject of Kürten’s recent paintings. Almost all depict isolated buildings that are surrounded by a wall, hedge or lush vegetation and draw the viewer's attention to a singular piece of invented architecture. These structures often closely resemble iconic mid-century modern dwellings, but have been rebuilt by Kürten’s conflation of imagery. Their sense of familiarity is strong and viewers often feel they have visited these nonexistent homes. The surfaces of Kürten’s paintings are composed of innumerable brushstrokes forming patterns that evoke sky, water and foliage. The density of the patterning can elicit a sense of horror, destabilizing these beautiful illusions.

“Even though the houses and gardens that distinguish my paintings are drawn from real houses and gardens, taken from my own photos, books, and magazines, they are somehow transformed into the stuff of daydreams or nightmares. They are devoid of human presence; the apparent idyll feels isolated to the point of oppression. Nonetheless, there seems to be some sort of a presence, like a hidden secret, something untold and left to our imaginations. Heimlich describes this unsettling, disturbing uncertainty very fittingly.”1

The artist lives and works in Düsseldorf. His work has been the subject of several institutional exhibitions and two recent monographs: Here Comes the Night. Works on Paper 2009 – 2013, published by Hatje Cantz and Running to stand still, a monograph of recent paintings published by Galerie der Stadt Backnang. Stefan Kürten’s paintings are in the permanent collections of several European and American institutions including Kunstmuseen Krefeld, The Montreal Museum of Fine Arts, The Museum of Modern Art, New York and the San Francisco Museum of Modern Art.