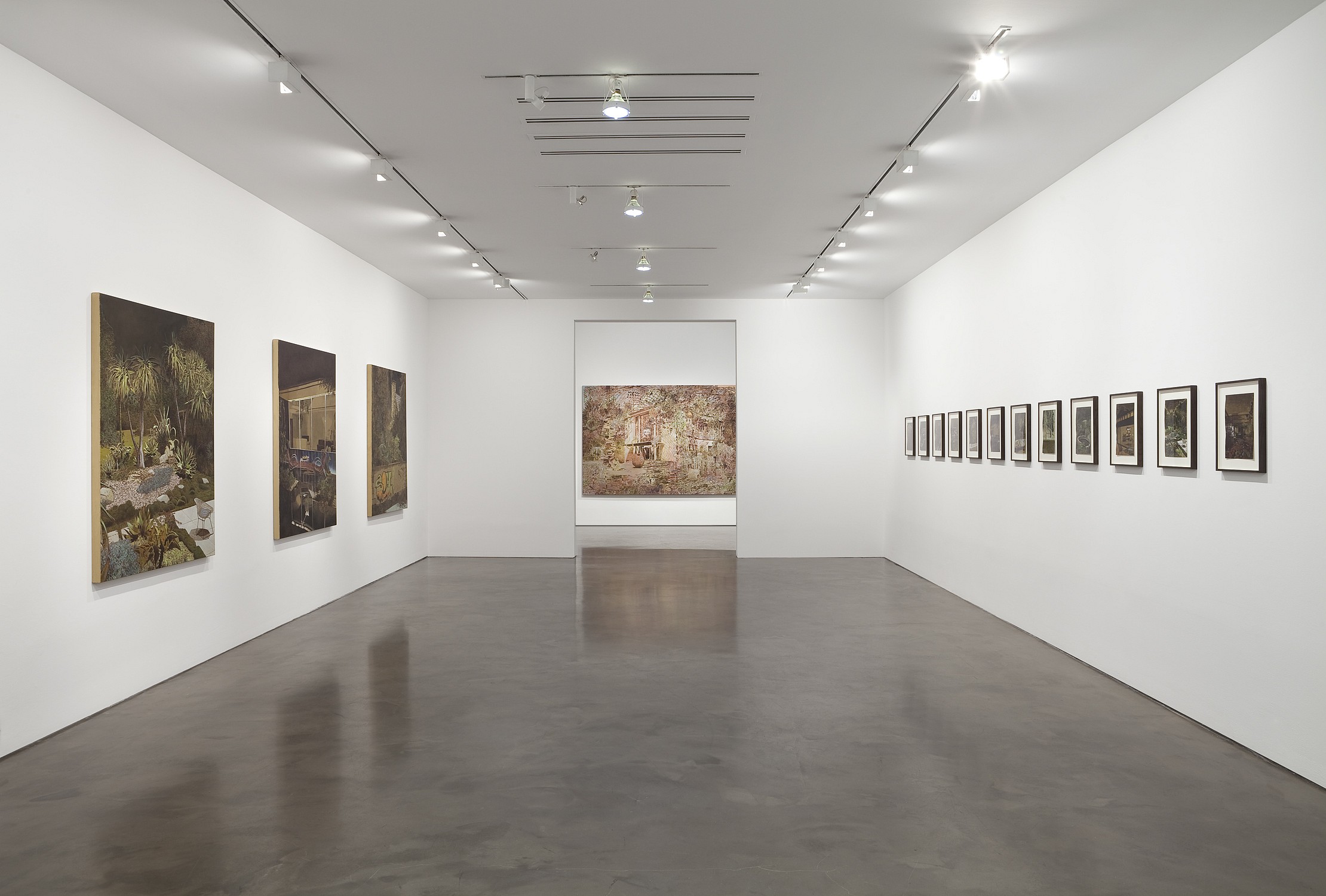 Alexander and Bonin starts the fall season with Here comes the night, a solo exhibition of new work by Stefan Kürten.   The exhibition will include Kürten’s most recent large paintings, executed in acrylic and ink on linen, as well as more than twenty smaller paintings on primed cardboard.

Kurten’s architectural and pastoral spaces evoke both tranquility and unease.  His interiors and landscapes are unpeopled but suggest inhabitation.   Simultaneously generic and intimately familiar, these paintings depict everyday urban, suburban and rural scenes with a richness of detail.   Sitting in a dream is a view into the interior of an international style house foregrounded by upholstered patio chaise lounges. Deeper well’s similar style house is augmented by a brick-lined well that is both promising and threatening in its potential. An allotment garden and it’s peculiarly alluring garden house structure are seen from a slightly aerial viewpoint in Du alleine, ich alleine (You alone, me alone).

On these works, Kurten notes:

“In all of the new work there is a very special light that seems to create a night scene…even if it’s daytime.  The time of day in which the scene is set seems to be fluctuating. There is a mysterious glow that illuminates the motifs.  I found Here comes the night very suitable, because it sounds poetic and foretelling, but also leaves enough room for fantasy and interpretation. I like the ambiguity of its promise.  The combination of dark and strangely tinted golden skies reminds me of the weird and threatening light of the moment before the arising of a thunderstorm.”

The artist lives and works in Düsseldorf.  He studied with Michael Buthe at the Kunstakademie Düsseldorf and later at the Art Institute of San Francisco.  In 2007, “Shadowtime,” a survey of his paintings since 2001, was shown at Museum Haus Esters, Krefeld and the Royal Hibernian Academy, Dublin.  Several paintings were included in “Gesamtkunstwerk, New Art From Germany” at the Saatchi Gallery, London in the spring of 2012.    His work is represented in the permanent collections of several European institutions as well as the Museum of Modern Art, New York, the San Francisco Museum of Modern Art and the Montreal Museum of Art.