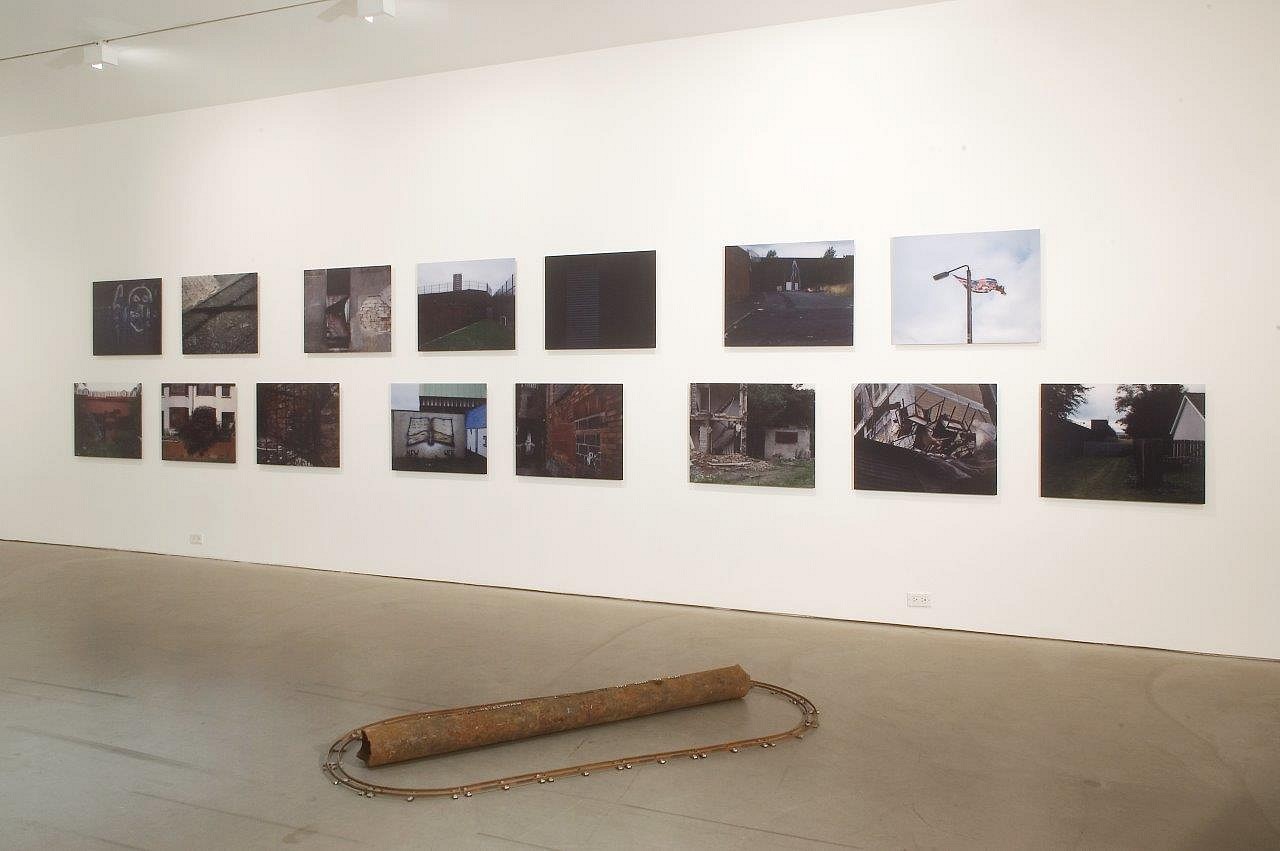 RE: LOCATION includes works made and exhibited in diverse locations by Willie Doherty, Mona Hatoum, Diango Hernández, Emily Jacir, Rita McBride and Doris Salcedo.  Unseen in New York, the majority of the works are being shown for the first time in the Americas.

Included are selections from APPARATUS, a series of forty photographs by Willie Doherty exhibited earlier this year at Galería Pepe Cobo, Madrid and Galerie Nordenhake, Berlin.  Images,  shot on the streets of Belfast, shift between representation and abstraction, panoramic and close-up as they depict areas of the city that have been devastated by the ongoing sectarian violence. A traveling survey of his video work will open at Laboratorio Arte Alameda, Mexico City in September 2006.

Mona Hatoum’s ink on fabric Every door a wall takes the form of a curtain displayed in a doorway.  The flexibility and openness of the curtained doorway contrasts with its silk-screened image of a truck filled with smuggled humans.  Originally created for a solo exhibition in Oaxaca, this work has been extensively exhibited in Europe.  In 2004, a comprehensive survey of Hatoum’s work in all media was seen in Hamburg, Bonn, Stockholm and Sydney.

Currently working in Düsseldorf, Cuban-born artist, Diango Hernández will exhibit Drawing (the underdevelopment is a long game, do you want to play), a construction of found plumbing pipe, sign lettering and toy train tracks.  This work, made in Mönchengladbach and exhibited in a solo exhibition at the Altes Museum in 2005, playfully and critically comments on Cuban social programs of the Castro era.  Earlier this year, Hernández’s work was the subject of a solo exhibition at Kunsthalle Basel.

Emily Jacir, best known in New York for Where We Come From, a series of photographs and text works, will exhibit embrace, a circular motorized sculpture that was fabricated to look like the baggage delivery systems of airports.  The 179 centimeter diameter of this rubber and aluminum sculpture refers to the artist’s height.  The sculpture’s still quietness is changed by visitors to the exhibition whose presence activates the work.  An earlier version of embrace was made during Jacir’s 2003 residency at OK Centrum, Upper Austria.  The version included in RE:LOCATION was shown last year in Sharjah Bienniel 7, United Arab Emirates.

Born in Des Moines and schooled in New York and California, Rita McBride currently lives in Cologne and is a professor at the Kunstakademie Düsseldorf.  Hexelerator (domestic) (2005), a nine-part brass and aluminum wall structure, installed on a convex corner, is the second of several recent works based on hexagon-shaped modular units.  The first and largest version, made from Sisal, was shown in raumfürraum at the Kuntsthalle Düsseldorf in 2005.  This fall, McBride will have solo exhibitions at Alexander and Bonin and Annemarie Verna Galerie, Zurich.  Her large scale (30 meter height) public sculpture, Mae West, is scheduled to be installed in Munich in 2007.

Doris Salcedo’s most recent installation, Abyss, will be represented in RE: LOCATION by a related iris print.  Responding to a pre-existing domed brick ceiling in a gallery at Castello di Rivoli, Salcedo extended the dome downward with walls of fabricated matching brick to create a nearly enclosed sculptural environment as part of her participation in the recent T1 Triennial of Contemporary Art of Turin.  Salcedo will also exhibit a steel sculpture related to Thou-less, a nine part work in the permanent collection of the Neue Galerie, Kassel.

Mona Hatoum, Emily Jacir and Diango Hernández have each created a new work for the upcoming Zones of Contact: 2006 Biennale of Sydney (June 8 – August 27, 2006).