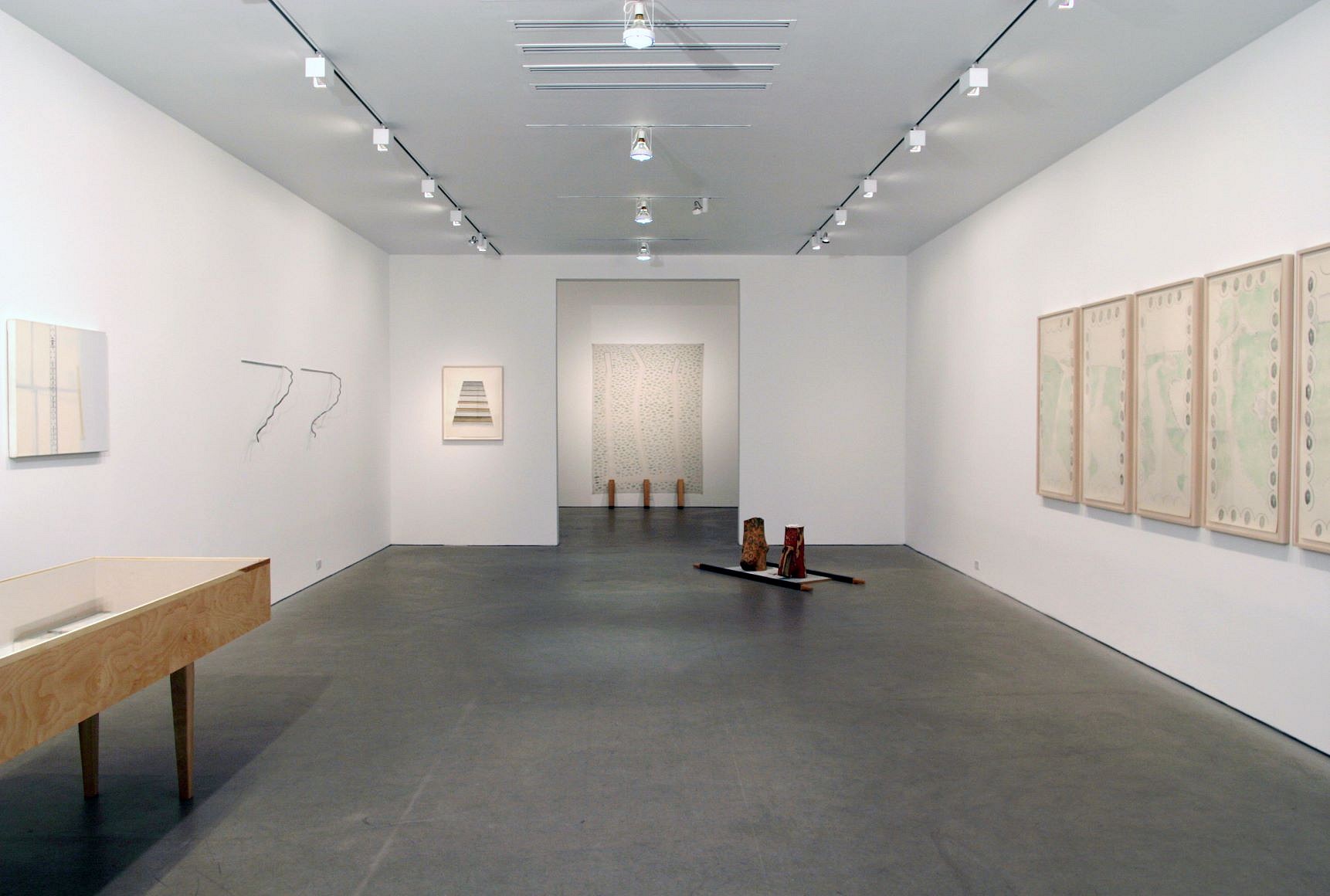 Alexander and Bonin will begin the fall season with an exhibition of works from 1965-1975 by three artists: Neil Jenney, Ree Morton and Sylvia Plimack Mangold. The works of these artists exemplify a generation’s interest in new materials, forms and content.

Prior to painting his well-known “bad” or “unconcerned” paintings, Neil Jenney (born 1945) made sculptural work from 1967 – 1969. He used a variety of materials including electric light fixtures, corrugated tin sheeting and aluminum. The largest group of his sculpture, Linear Pieces, was made by hand bending aluminum rods. Each Linear Piece is a diptych; the two parts echo one another and display the differences resulting from Jenney’s process. Linear Pieces that are painted with pigmented silicone rubber and unpainted aluminum works will be shown. These pairings of alike, but different elements presage Jenney’s consistent use of paired imagery in his later work, especially the 1969-70 paintings such as Girl and Vase, Husband and Wife or Them and Us. A painting from this period will also be included in the exhibition.

Ree Morton was born in 1936 and, after having three children, attended Tyler School of Art, Philadelphia, receiving her MFA in 1970. From 1970 to her untimely death in 1977, she created a significant and varied body of work exhibited at Artists Space, NY; Institute of Contemporary Art, Philadelphia; and the Whitney Museum of American Art. She is considered a seminal artist in discussions of installation art, feminism, and the birth of pattern and decoration. Her influence and spirit continues to be felt in the work of numerous contemporary artists and is often sited by critics and curators. This exhibition will include Untitled, a 1973 painting on unstretched canvas at the base of which are wood blocks that continue the abstract, but nature based, imagery in the painting. A group of six Game-Map drawings from 1972 further elucidate the sources of her imagery.

Beginning in 1965, Sylvia Plimack Mangold created rigorous, formal works that distinguished themselves from the work of her peers at Yale and in New York by their consistent use of imagery. Prominent in her early work are floorboards, rulers, mirrors and tapes—rectilinear elements that work in grid or formal arrangements, but are also of the real world. A previously unexhibited group of Staircase drawings, watercolors and a painting on shaped canvas from 1968 will be included in this three-person show. Additional drawings and sketchbooks from the mid-1970s will also be included in the exhibition. Shortly after this period, Plimack Mangold turned her observation from interior elements to the landscape of her Washingtonville, New York home.