Eugenio Dittborn: The Foreseen and Unforeseen Position of their Bodies 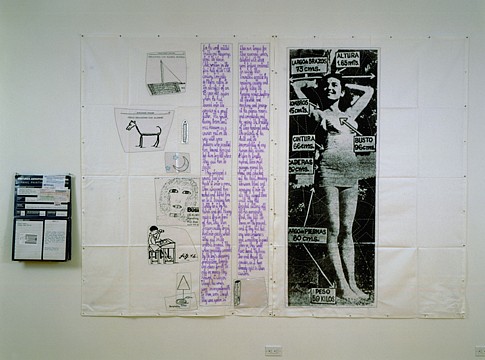 Eugenio Dittborn: The Foreseen and Unforeseen Position of their Bodies
Mar 10 – Apr 14, 2001

The exhibition will include five new airmail paintings; each comprised of two to six panels. These new paintings all employ several techniques. Using chromatic dyes, Dittborn stains the fabric emphasizing impregnation and mark making. At the same time, by stitching embroidered, drawn or silk-screened images to the support, he speaks of provisional and temporal decisions. While the works exhibited all belong to Dittborn’s series of airmail paintings and share methods of execution, each of the new paintings is a kind of autonomous model. The selection for this exhibition emphasizes differences: Dittborn sees it as providing angles of extreme tension and distance.

The airmail painting has been Dittborn's primary occupation since 1984. Initially executed on large sheets of brown paper, which could be folded down to one-sixteenth of its size and sent in large envelopes through the international mail system, he has explored other materials since 1986. These new paintings are executed on cotton duck. The envelopes, which are exhibited alongside the panels, provide information concerning the sources for the images in the paintings. Dittborn’s images are drawn from historical, anthropological, and criminal documents as well as cartoons and found drawings of faces.

Eugenio Dittborn was born in Santiago, Chile in 1943 and continues to live and work there. He has exhibited his work internationally since 1984.   In 1993, a large survey exhibition was organized by Witte de With, Rotterdam and the ICA, London. The New Museum, New York and the Museo de Bellas Artes, Santiago exhibited primarily large-scale works in 1998. Since his last New York exhibition, he has had a one-person show at Château de Jau, Cases de Pène, France and been included in group exhibitions at the Reina Sofia, Madrid, P.S.1, New York, the Kwangju Biennale, S.Korea and Presentation House, Vancouver. An exhibition of seven airmail paintings dating from the years 1989-1999 will be presented at the Blaffer Gallery, University of Houston from April 7 – May 22, 2001 and his work is included in Lugares de la Memoria at the Espai d’Art Contemporaini, Castelló, Spain in April of this year.