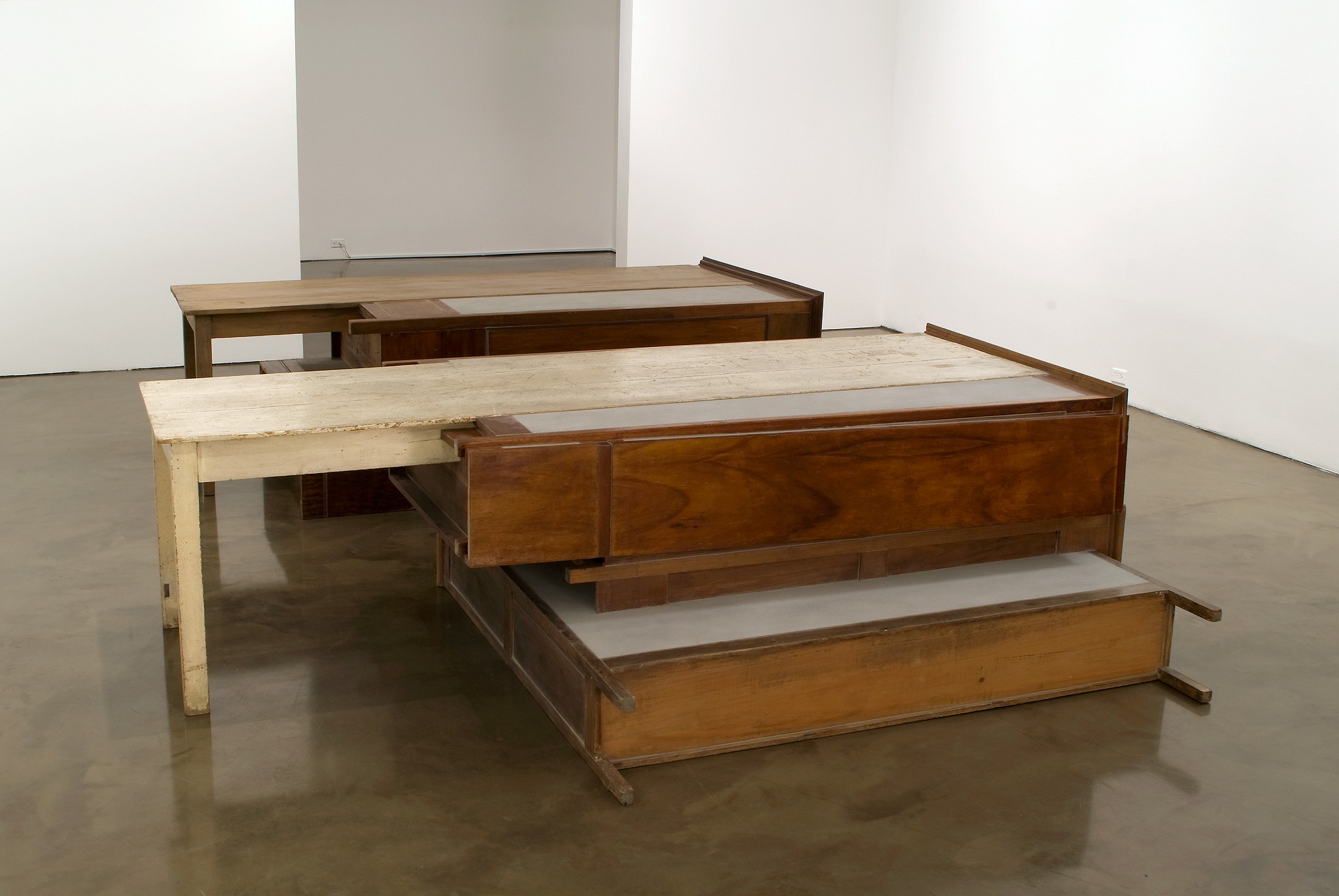 Doris Salcedo will exhibit two new sculptures in her one-person show at Alexander and Bonin, her first in New York since 2000.

These sculptures expand a vocabulary of form Salcedo began to explore in 1992 when she first used found domestic furniture in her work. She filled the voids in beds, chairs and cabinets with concrete and sometimes fabric. In these works the private and the institutional collide; cabinets which belong in an interior/domestic space are forced into unlikely juxtapositions with concrete and tables. In her words, ‘these dislocated pieces address the violent collision of different acts, times, feelings and opposite views.’ Once rectilinear and predominantly upright, the newest sculptures are composed of skewed forms positioned on their backs.

During the past few years, Doris Salcedo has used both interior and exterior spaces to create environments charged with politics and history. Novembre 6 y 7 (2002) was a 53 hour performance which commemorated the 1985 seizure of the Supreme Court in Bogotá and the people killed during that siege. Her 2003 installation for the Istanbul Biennial was comprised of 1600 wooden chairs intricately fitted into a vacant space between two buildings. At Castello di Rivoli, Turin (2005), she transformed a large room by extending the vaulted brick ceiling of the gallery downward to the floor. Salcedo’s brick walls evoked thoughts of incarceration and entombment.

Most recently, in 2007, Doris Salcedo created the 157 meter fissure in the floor of Turbine Hall, Tate Modern. This sculpted opening cutting across the floor of the building evoked the historical political, social and cultural divides between the first and the third worlds.

Doris Salcedo was born in Bogotá, Colombia where she continues to live and work. She has exhibited in group and one-person exhibitions at venues such as San Francisco Museum of Modern Art (2005 and 1999), Documenta XI (2002), Camden Arts Centre, London (2001), the XXIV São Paul Biennial and the New Museum of Contemporary Art, New York (both 1998). She is currently working on a public installation in Los Angeles, sponsored by the Hammer Museum, for 2010.