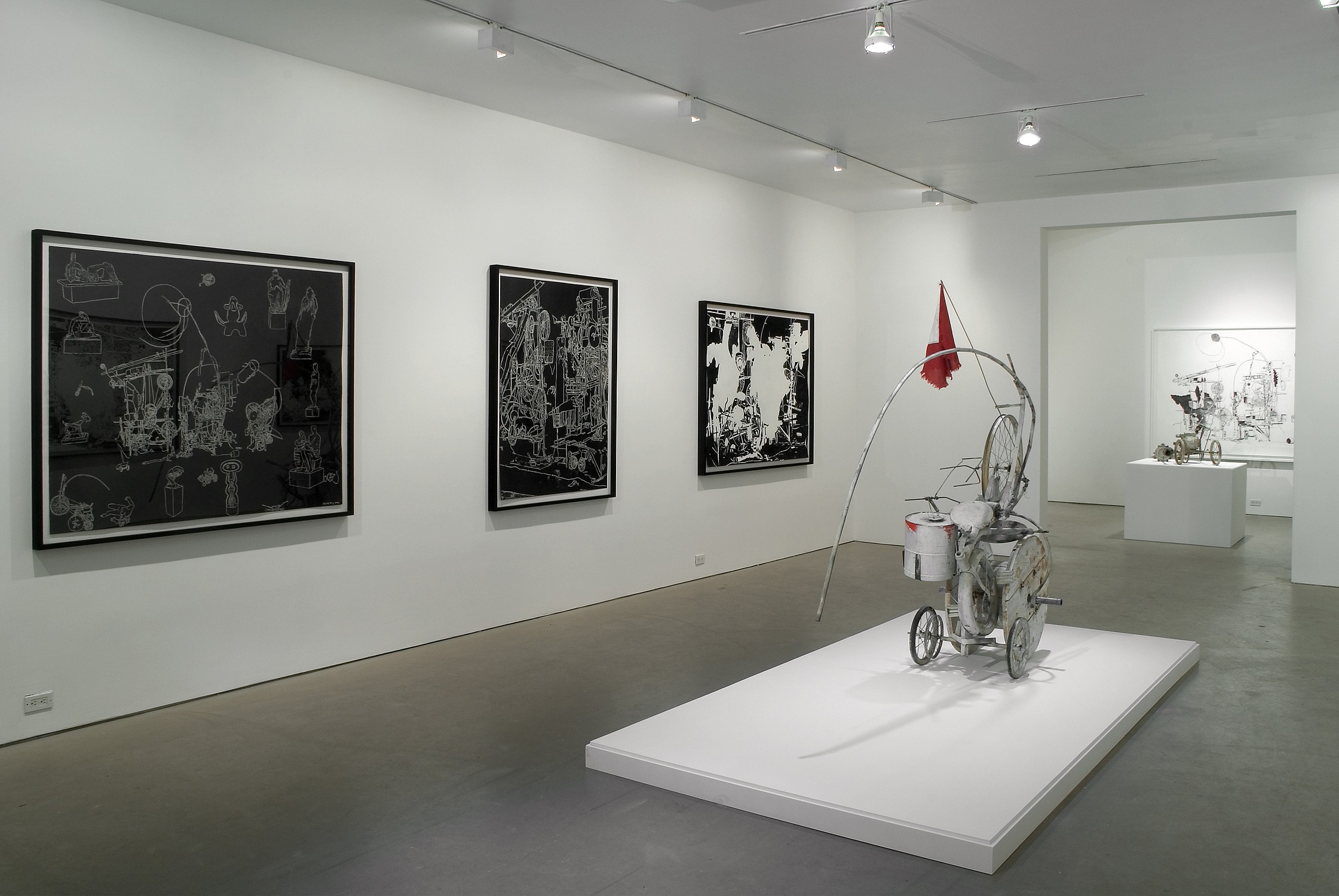 An exhibition of new drawings by Michael Landy will open February 20th at Alexander and Bonin.

Landy’s new work references Homage to New York, Jean Tinguely’s 1960, self-destructing machine constructed in the garden of the Museum of Modern Art over a period of three weeks in March 1960. Set into motion for 27 minutes on March 17, 1960, the machine spasmed, shook, and burst into flame but failed to fully self-destruct, forcing firemen and museum guards to take action. Michael Landy’s fascination with Tinguely’s work dates back to the Tinguely retrospective at the Tate, London which he saw as an art student in 1982.

For almost two years, Landy has been working on drawings in charcoal, oilstick, glue and ink based on research he conducted at the Museum Tinguely in Basel and the Museum of Modern Art in New York. All of the drawings in this exhibition display Landy’s meticulous draftsmanship but vary in their depiction of the 1960 event. In some, such as H.2.N.Y. Self-Constructing, Self-Destroying Machine, Landy renders minute details of Tinguely’s machine with linear clarity. Others, including Machine Comedy and Kinetic Apparition, are less precise and serve to capture the explosive chaos of the machine’s break down. Landy’s black and white palette ties his drawings to the original black and white photographs and lends drama to the scenes portrayed.

Several ‘fragments’ from the 1960 Tinguely installation will be included in the exhibition, including ‘the suicide carriage’ from the collection of the Museum of Modern Art and the ‘klaxon’ from Museum Tinguely.

Michael Landy was born in 1963 in London, where he continues to lives and work. His 2001 monumental installation, Break Down was a systematic destruction of his possessions in a former department store in London. In 2004, he created Semi-detached, a full scale model of front and back facades of his parents’ house, shown at Tate Britain. His work has been included in numerous group shows since 1989, including the 1997 Sensation exhibition at the Royal Academy, London and Brilliant: New Art from Britain at the Walker Art Center in 1995.

Alexander and Bonin and Thomas Dane Limited (London) are co-publishing a catalogue to accompany this exhibition. Entitled Michael Landy H2NY, the publication will feature an essay by Barry Schwabsky, images of thirty-nine of Landy’s new drawings, and reproductions of press surrounding Jean Tinguely’s Homage to New York, 1960, including Calvin Tomkins’ comprehensive account of the life and destruction of Tinguely’s Homage to New York in The New Yorker.