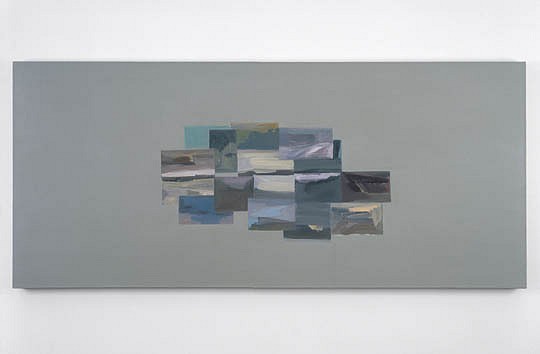 Robert Bordo will exhibit new paintings at Alexander and Bonin from March 18th through April 24th. This will be Bordo’s first exhibition in New York since his 1996 show at Tibor de Nagy Gallery.

As with previous bodies of work, Bordo begins his nearly abstract paintings with imagery derived from pre-existing two-dimensional forms. Maps, charts and envelopes have been the inspiration for his paintings. In these new works, the starting point is arrangements of invented landscape postcards. The scale of the works is traditional easel painting and the surfaces are slowly and beautifully built of oil and medium. The paintings tend to have a single dominant color with the landscape subtly emerging from the ground. There is a range of paint handling from the more gestural to the refined.

Robert Bordo was born in Montréal and has exhibited in New York since 1987. He has also made several commissions for the theatre, primarily for the Mark Morris Dance Group. He has been a member of the faculty at Cooper Union School of Art since 1995. Last year he was awarded a Tesuque Foundation Fellowship.